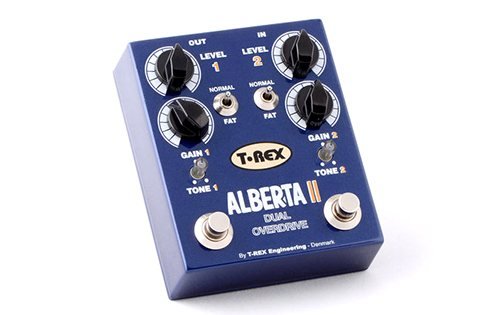 Since the introduction of the T-Rex Alberta overdrive, guitarists have embraced the tonal qualities and ease of use of the pedal. So much, that quite a few are using two Albertas to get their fix on stage and in the studio, using one for creamy rhythm sounds and the other for a cutting solo sound.
T-Rex have been asked to come up with a pedal that does this and more, but stays true to the sound, usability and size of the old girl.
On popular demand from guitarists around the world, we give you the T-Rex Alberta 2!
The classic overdrive sound has doubled in quantity, but the sonic footprint and physical size is the same, giving the user a three step rocket of creamy, responsive overdrive without sacrificing pedalboard real estate.

With two channels of overdrive, you can now get the clean sound from your amp, a nice “on-the-edge” overdrive from one channel and a punchy rock sound from the other channel, or go from a medium boost to a fat, clean-ish boost to push the front end of your amp.

Need a low-end boost for those “stratty” moments?
Now you can flip a switch for an even thicker tone on either channel of the Alberta 2, expanding the tonal range and usage further than was possible before. We´ve also given channel 2 a slightly more open and punchy sound, for a little more pick attack and push, but with the same voice of channel 1.

Just like its little sister, the Alberta 2 can serve up more than a nice Blues on the Rocks, so don´t judge this book by its cover. Thanks to the added features, there´s a wide range of sounds hidden inside, that will get the job done for players in all music genres.